Determine the type of rolling mill and its layout

The main basis for the selection of the rolling mill is the steel grade, product variety and specification, the size of the production scale and the product production process determined by the workshop.

When choosing a rolling mill, generally pay attention to the following principles:

1) Under the premise of concealing the product plan, make the rolling mill composition reasonable and compact;

3) Guarantee to obtain products of good quality, taking into account the possibility of producing new products;

4) Conducive to the realization of mechanization and automation of rolling mills, and help to improve the working conditions of workers;

5) The structure of the rolling mill is advanced and reasonable, easy to manufacture, simple to operate and easy to maintain;

For wire and bar mills, steel pipe mills, and steel plate mills, in addition to a certain strength, sufficient stiffness is also required to ensure the correct geometry and precise dimensions of these rolled products. Therefore, in addition to following the above general principles when selecting a rolling mill, the structural type, main technical parameters and their layout of the rolling mill should be determined according to the production characteristics and specific requirements of different products based on the process requirements of the product.

open train mill , especially roughing mills, require multiple passes, slow rolling speeds and long rolling rhythms. However, the section of the billet is small, the temperature drop of the rolled piece is fast, and the temperature difference between the head and the tail is large. When the size of the billet and the specification of the finished product are given, in order to minimize the number of rolling passes, it is necessary to use a rapid extension pass system as much as possible. Such as ellipse-square, hexagonal-square hole type. For a rolling mill arranged in a row, the rotating speed of the rolls in the same row is the same, and the rolling speed does not increase with the increase of the length of the rolling stock, so the output is small, the labor productivity of the rolling mill is low, and the quality of the rolled products is also poor, and it is difficult to achieve automatic control. Abroad has been eliminated. This is an important disadvantage of rolling mills arranged in tandem.

However, the length of the rolling stock increases with the increase of the number of passes. The distance between the stands also increases with the length of the rolling stock. Therefore, the rolling mills arranged in parallel have a longer workshop, which leads to an increase in the floor space and investment of the workshop, so it is only suitable for the production of steel with larger cross-sectional dimensions, or for rough rolling mills in other layouts.

In addition to rolling one step in sequence for each frame, the principle of equal flow of metal per second per unit time of each frame of the continuous rolling relationship must also be maintained. The mechanization and automation of the rolling process is easy to achieve due to the continuous arrangement of the rolling mill. Higher rolling speeds can be used, resulting in great productivity. Continuously arranged rolling mills are the development direction of various types of rolling mills.

Tandem rolling mills, especially roughing mills, require multiple passes, slow rolling speeds and long rolling rhythms. However, the section of the billet is small, the temperature drop of the rolled piece is fast, and the temperature difference between the head and the tail is large. When the size of the billet and the specification of the finished product are given, in order to minimize the number of rolling passes, it is necessary to use a rapid extension pass system as much as possible. Such as ellipse-square, hexagonal-square hole type.

The billet section of the continuous bar rolling mill is large and the stand spacing is small. On the contrary, during high-speed rolling (v≥10m/s), the heat transformed by deformation work dominates the rolling temperature change, and the temperature of the rolled piece rises. The temperature-controlled rolling with intermediate water cooling as the main method and the low-temperature rolling with the purpose of energy saving and consumption reduction are relatively prominent. Therefore, the requirement to reduce the number of rolling passes as much as possible is far less urgent than that of the tandem rolling mill.

Continuous bar and wire rod mills have a wide range of product specifications, and try to use common pass and adjustment pass. Especially in the production of larger specifications, the finished products can be produced from the first few stands of the finishing mill or even from the middle mill, so the round holes are required to be placed in front, which also correspondingly expands the application range of the oval-round pass system.

Micro tension and looper control techniques have been widely used in continuous bar mills. The micro-tension control system of the roughing and intermediate rolling mills requires not only a relatively stable section of each pass, but also a relatively stable working diameter of the rolls. That is to say, the wear of the pass is required to be uniform, thereby shortening the self-adaptation process of the rolling mill and reducing the adjustment frequency of the micro-tension control system. As far as looper control is concerned, the setting of the looper and its working conditions are closely related to the shape and size of the section of the rolling stock. Obviously, compared with other equiaxed rolling pieces of the same cross-sectional area, the circular and elliptical rolling pieces have a smaller moment of inertia and are easier to complete sets, and the perimeter of their cross-sections is arc-shaped. It can reduce the influence of the bending of the rolling piece and the contact between the looper roll and the rolling piece on the surface quality of the rolling piece during the complete set process. This is more beneficial to alloy steel bars that are sensitive to cracks and temperature-controlled rolling, and these are also important reasons for choosing the elliptical-round pass system.

4.Determination of the number of rolling mill stands

The number of rolling passes and stands can be determined by the following formula: 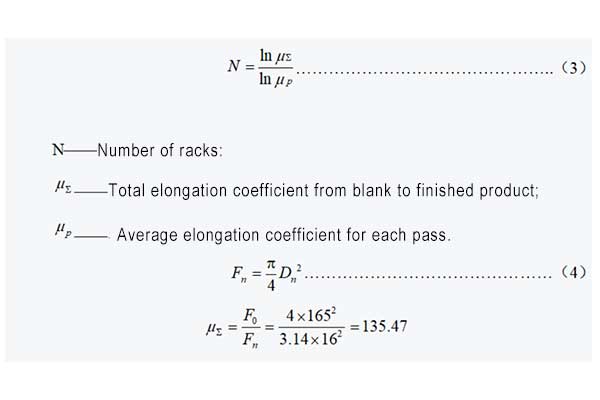 Select the number of racks as 18.

In the production of large-sized products, the number of passes (empty passes) can be thrown away, reducing the number of rolling passes.

Rolling is divided into three parts: rough, medium and finishing. A rolling mill with alternating horizontal and vertical rolls is adopted, so that the rolling stock can be twisted in the rolling mill, which can improve the bite and reduce the occurrence of accidents.

The structure of the rolling mill is mainly distinguished by the number, configuration and size of the rolls, which are as follows:

According to the requirements of this design, due to the full continuous rolling production, all the rolling mills are arranged alternately with two-high rolling mills, which can improve the bite and reduce the occurrence of accidents.

PrevPreviousHSS ROLLS Material
NextReasons and treatment of piled steel in the rolling process of high-speed wire rodsNext
How long is your delivery time?

How can we guarantee quality?

Tell us a little about your application and we’ll get back to you to finalize a quotation to meet your needs as quickly as possible.

Sort by position on the rolling mill：

LMM high-speed steel rolls have higher steel passing per groove (times) due to their good wear resistance, which saves roll changing time, improves rolling mill operation rate, reduces roll consumption, and improve the overall efficiency of the factory.
Generally, the amount of steel passing in a single groove (times) is 3 to 5 times that of cast iron rolls.

Are You Looking for rolling mill rolls? – contact us to get best plan.

We would be happy to help and advise if you have any questions or inquiries.